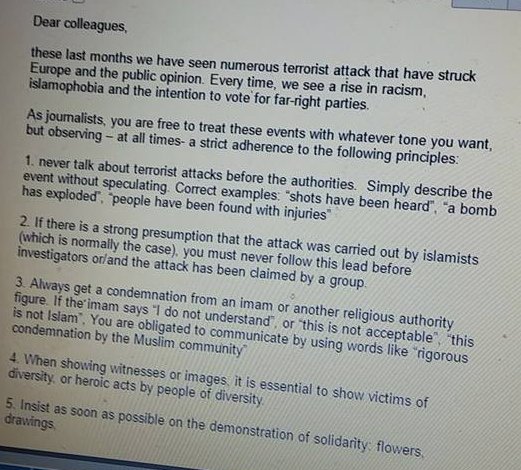 There last months we have seen numerous terrorist attacks that have struck Europe and the public opinion. Every time, we see a rise in racism, islamophobia and the intention to vote for far-right parties.

As journalists, you are free to treat these events with whatever tone you want, but observing - at all times - a strict adherence to the following principles:

1. Never talk about terrorist attacks before the authorities. Simply describe the even without speculating. Correct examples: "shots have been heard", "a bomb has exploded", "people have been found with injuries"

2. If there is a strong presumption that the attack was carried out by islamists (which is normally the case), you must never follow this lead before investigators and/or the attack has been claimed by a group.

3. Always get a condemnation from an imam or another religious authority figure. If the imam says "I do not understand", or "this is not acceptable", "this is not Islam", you are obligated to communicate by using words like "rigorous condemnation by the Muslim community"

4. When showing witnesses or images, it is essential to show victims of diversity, or heroic acts by people of diversity.

5. Insist as soon as possible on the demonstration of solidarity, flowers, drawings...


NB: not sure if this is real or satire... Could be both, really, but more likely satire (I hope), because some parts seem really exaggerated.